Yesterday I went to an elephant sanctuary, Into the Wild Elephant Camp near the city of Chiang Mai. 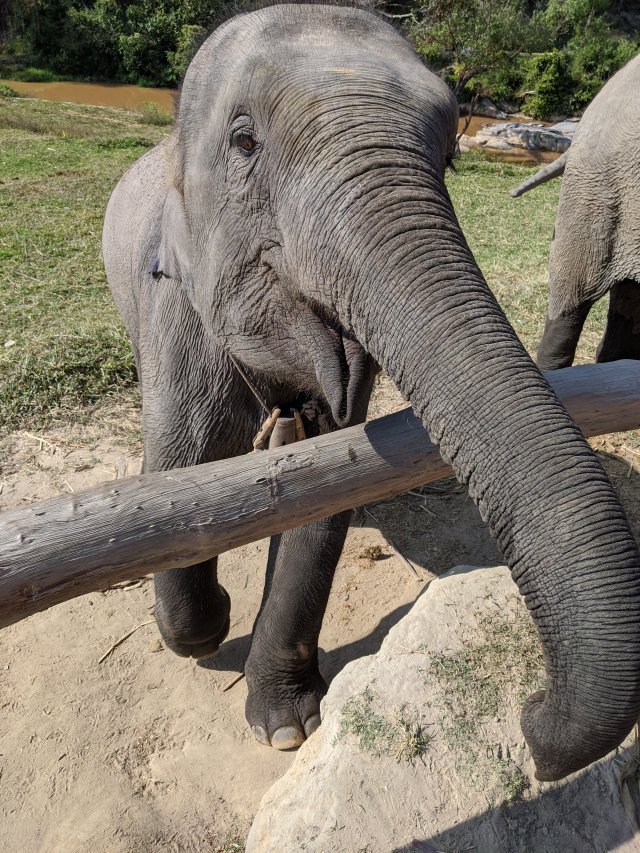 I knew I would it, but the experience was much more meaningful than I expected. Elephants are really big, even the babies, and they’re clearly intelligent in a way that’s very different to humans.

An elephant’s skin is leathery and tough but still supple. The hairs on their heads and backs are stiff and bristly. Their trunks are surprisingly dexterous, and incredibly powerful. And they’re remarkably quiet, their huge flat feet muffling their footsteps, to the point that this camp puts wooden bells around their necks so they can’t sneak up on you.

Into the Wild is well known for its ethics – their two adults (of a herd of 5) are both rescued working elephants, and they have a big tact of jungle far from the city where the elephants roam. It’s still not quite a natural setting. The herd has a few handlers to keep watch over them and keep them from harm, the camp buys much of their food to avoid over-grazing the land, and of course they spend a lot of time interacting with tourists, which pays most of the camp’s expenses. But there’s no riding, and it’s a lot closer to a natural state than many such attractions.

As they gave us the rundown before the elephants arrived in the morning, the camp’s owner asked us why we think it’s important not to ride the elephants. After all we ride horses, camels and donkeys, or use them as draft animals, in other parts of the world without thinking twice about it. Elephants are far bigger and stronger than those animals, caring a human would be almost trivial for them. What makes elephants so special that they can’t be ridden or worked? Do we truly care, or is it just easier to pass judgement on a foreign culture far from home? It’s a tricky question, and I don’t know that I have a good answer.

Seeing elephants was one of the big items on my list for this trip, and I would say I’ve checked it off in a major way. Spending a day with these incredible animals was one of the highlights of my trip, and I’m glad that I was able to do so responsibly.