On November 1st my sister flew into Hanoi, and we spent the next few days exploring the city together. Hanoi, particularly the Old Quarter where we stayed, has a very different feel to Saigon. Instead of a network of tiny winding streets contained by a grid of huge boulevards, Hanoi’s streets are all medium sized, all slightly crooked, and all just as chaotic as anywhere in Vietnam.

We did many touristy things in Hanoi. We went to Ho Chi Minh’s mausoleum and the temple of literature. We visited train street where cafes and shops spill out onto the northbound train tracks and twice a day they pick everything up and move it out of the way so the train can get through, which is officially closed but still kind of exists. We got lost in the streets of the Old Quarter, and took a truly excellent food tour. 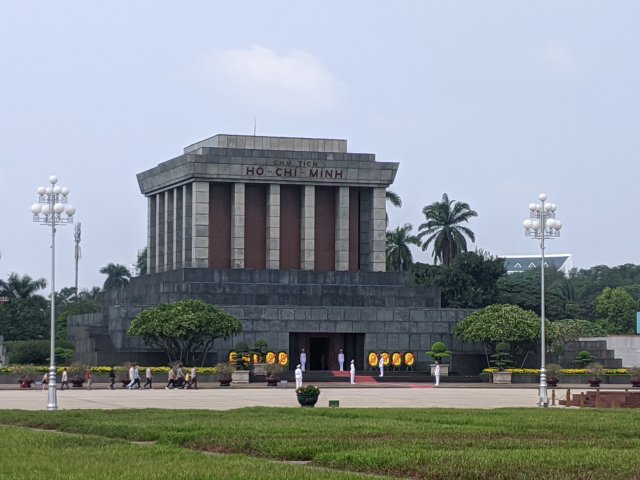 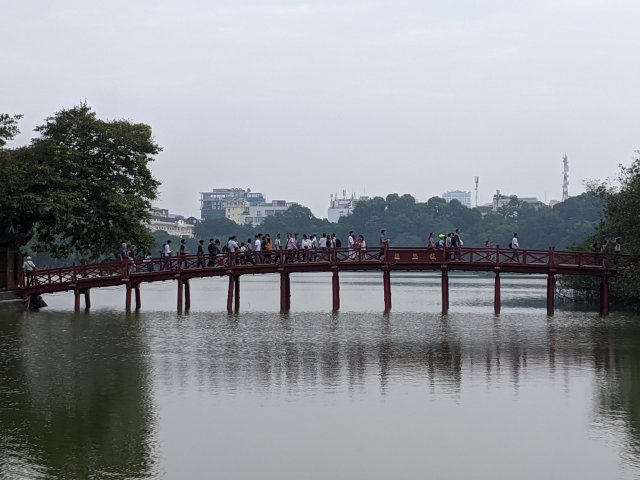 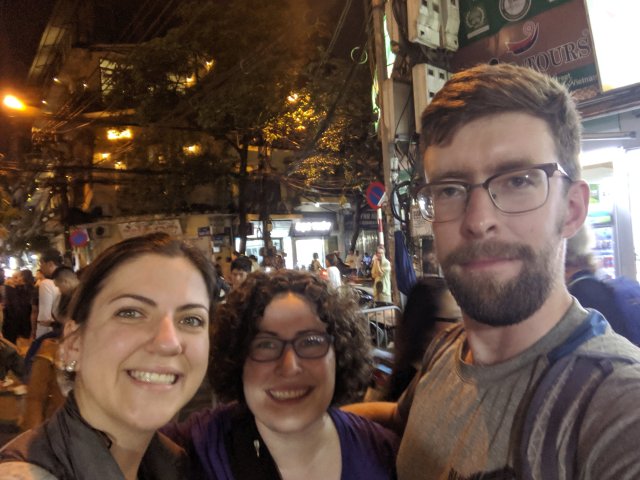 Then we caught the night train north to Sapa. The trains in Vietnam are interesting – the government run train contains normal coach seating, and luxury and sleeper cars run by private companies and booked independently are attached to the end of it. We booked through a company called Pumpkin Express – the cabin looked nothing like the luxury room promised on the website, but it was clean and private and we managed to get a few winks in.

Sapa was one of the places I was most excited about for this trip. It’s a stunning mountain valley in the far north of the country, close to the Chinese border, and it’s famous for its beautiful rice terraces. We had booked a two day trek through the area with Sapa Sisters, an employee-owned company known for hiring women of the local H’Mong ethnic minority as guides and paying them a good wage. Their mission is explicitly feminist, focused on empowerment and education. How could we not choose them?

We ate a quick breakfast, left our big bags at the office in Sapa town, and followed our guide down into the valley. 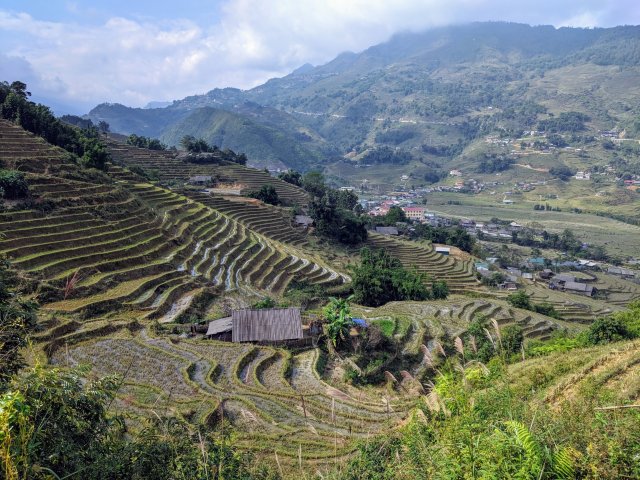 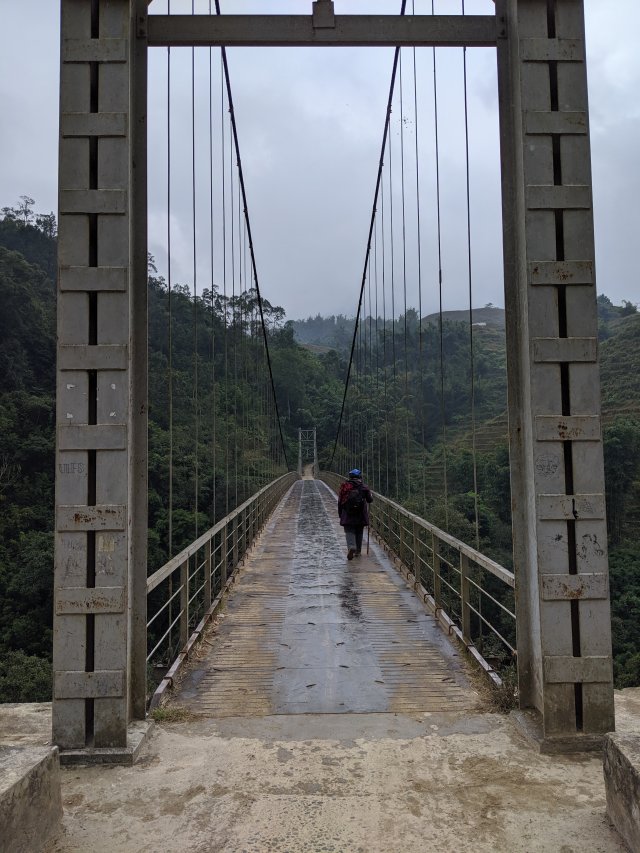 Our guide Sue was absolutely fantastic – she had a thousand stories about this place or that plant or the people living in this part of the valley. Surprise surprise, when you focus on empowerment and fair wages you attract and retain the best talent. The trek was just the two of us and Sue, so we got her wisdom all to ourselves.

We spent the night at a homestay, along with 6 other trekkers going through the same company, all in groups of one or two. Our hosts cooked us up a feast, and the 8 of us sat and chatted and drank rice wine late into the night. I thought it was a little disappointing that our hosts didn’t join in on the fun and conversation, but I guess this is an everyday experience for them. They probably get tired of the language barrier, of the cultural difference, of answering the same six questions over and over. Still, the divide was interesting. 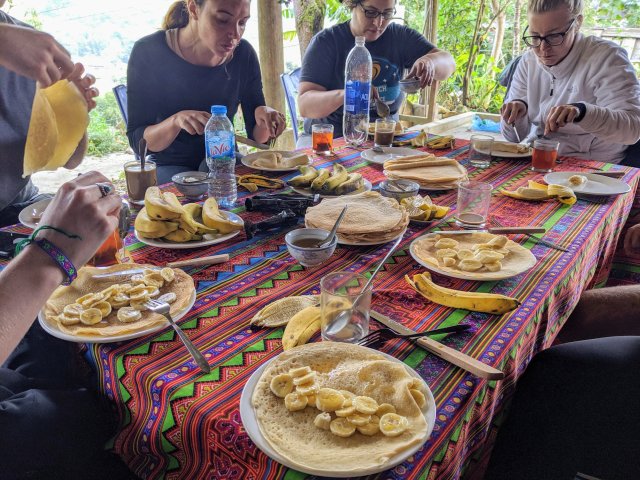 The second day was as beautiful as the first, though we kind of cheated – we trekked to the bottom of the valley, then took the bus back to the top.

Two things struck me on this journey. The first was the amount of construction in the valley. The road was being improved, there were a bunch of new terraces under construction, and many new homestays and hostels were on their way up. There are new bridges and a new hydroelectric station at the bottom of the valley. Sapa town itself looks like nowhere less than Whistler Village, somewhat incongruous in the Vietnamese countryside. There is clearly a ton of money flowing into this area, and change is coming hot and fast.

The second was the obvious poverty of the region outside the tourist trade. Local women unaffiliated with the trek would cluster around the tourists at lunch, aggressively peddling textiles with traditional designs, desperate for a deal. We took a break from trekking to see a traditional dye-works, and it was stark – a two room shack with bare concrete floors, no insulation, little furniture and a single bare fluorescent bulb in each room. The only decoration were two framed photographs of important family moments, a graduation and a wedding. “Poverty porn” is the term Liz used for our being there, and I have to agree.

Sapa has unquestionably been changed by tourism, and has probably already lost some of what made it unique. On the other hand, it’s impossible to argue that the people here aren’t better off as a result – Sue is clearly doing well, and even the cloth peddlers looked comfortable and well fed. Over the past 20 years rice yields have tripled, infant mortality has plummeted, schools have been built and 4G has been introduced. Some of that is general Vietnamese prosperity, but I get the impression that tourism has played a big hand in lifting people out of poverty here.

All we can do, I suppose, is educate ourselves and consume responsibly, spending our endless dollars and euros with companies that respect and empower the local people and environment. We could probably stand to do a bit more of that at home too.