Da Lat is a town of about 400,000 in the highlands of southern Vietnam. At about 1,500 meters above sea level it has a practically perfect climate, making it a hub for agriculture, particularly flowers and vegetables. It has a modest but growing tourism industry, capitalizing on both the flowers (Da Lat bills itself as the city of love and the honeymoon capital of Vietnam) along with outdoor sports in the surrounding mountains. I spent the last 4 days exploring the city, and would highly recommend it to anyone traveling in Vietnam. 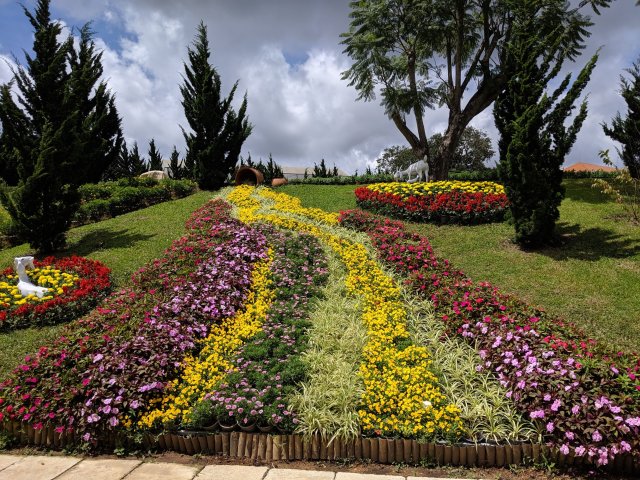 First off, I have to give a shout out to my hostel, Tree House. While it was not actually in a tree, Simon, Hannah and their staff were super helpful and friendly. From advice about where to eat, to booking tours and even my bus ticket to the next town, I probably would not have managed without them. Also, Hannah’s cooking is amazing!

As I often do, I spent my first day in Da Lat just wandering around the town to see what I would see. At the center of town is a man made lake, maybe twice the size of Greenlake, so my plan was to make a rough circuit. The wonderful staff at the hostel even gave me a map and highlighted a few things.

My first stop was the flower park, which was absolutely delightful. I would call it an embarrassment of flowers. I spent a while wandering around, then found a little pavilion and sat with my book for a while. 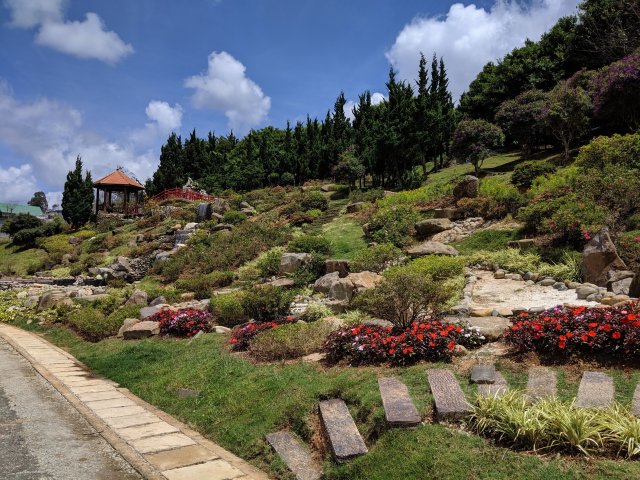 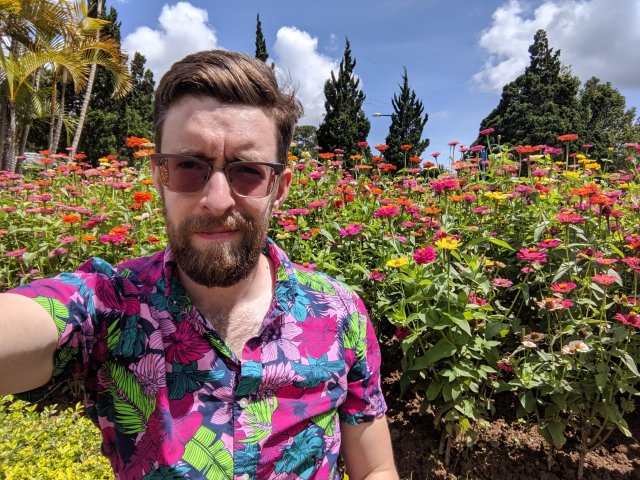 I saw a couple more interesting spots, including an old art deco train station from the colonial era and the strange flower-shaped buildings of Da Lat square. You can’t walk 100 meters in Da Lat without stumbling over a coffee shop. The tropical highlands are the perfect climate for growing the beans, and coffee culture is alive and well here. Coffee, lunch, more coffee, read a chapter, keep wandering.

Late in the day, my feet took me to the Crazy House, an architectural oddity nestled in the hills above town. If Salvador Dali, Antoni Gaudi and Dr. Seuss teamed up to design a villa, this might be what they would come up with. 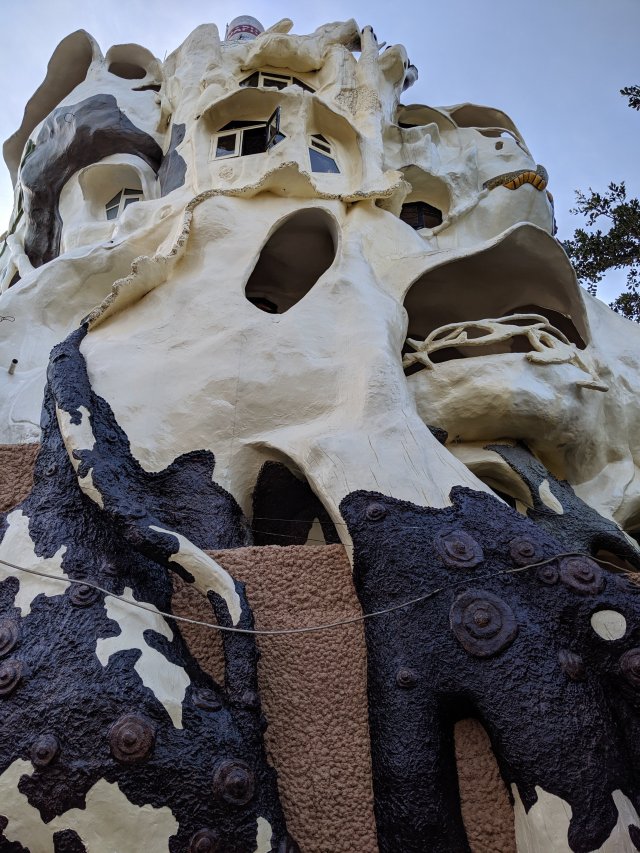 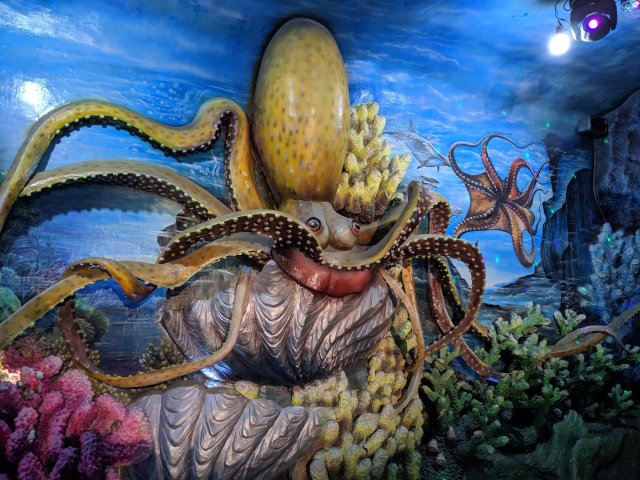 My second day in Da Lat I went canyoning. Canyoning is basically what it sounds like: you start at the top of a canyon and make your way down it, abseiling down waterfalls, descending zip lines, and generally having an exciting time. 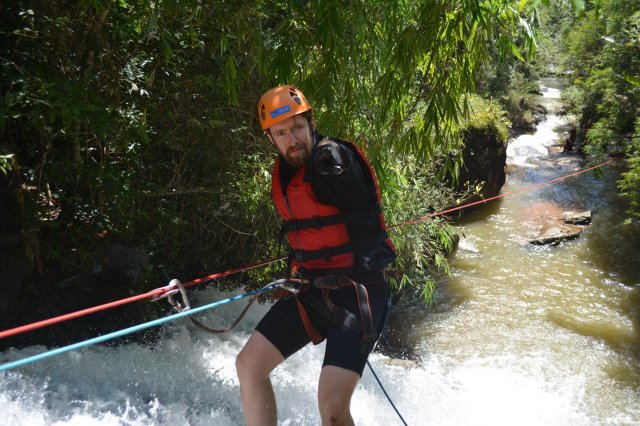 We finished with a delicious picnic lunch, including far and away the best mangos I have ever eaten.

The canyoning crew traded numbers and decided to go out drinking later in the evening. We found ourselves at Maze Bar, designed by either the same architect as Crazy House or one of her students. Maze is a good name for it – the place is a labyrinth spread across 6 floors and a basement. It had the feel of a nightclub in places, pumping bass and pulsing lights, but there were all sorts of quiet nooks and eddies where you could chat without shouting or even sit with a book. Someone said it was a coffee shop before it became a night club, and that makes a lot of sense to me. The drinks were cheap, the staff was friendly, and I kind of wish we had been there on a weekend instead of a Monday.

My last full day in Da Lat I signed up for a motorbike tour of the countryside. My driver met me at the hostel and then we joined a caravan: 6 bikes, each with tourist and driver.

My driver Thach and I made friends, so before he dropped me off he offered to come back a little later and take me out drinking. Of course I accepted – following leads and saying yes to things is one of my goals for this trip.

Around 9:00 I hopped back on his bike and we sped off. Our first stop was the lake, where we took a peaceful moment to savor some aromatic herbs he had grown himself. Then we wandered across the street to one of Da Lat’s two nightclubs. There we found pumping Vietnamese EDM, a table full of beers and a big platter of fruit, and a waiter to babysit us and make sure we didn’t mix up our drinks. There couldn’t have been more than 15 people in the whole club – it was a Tuesday evening in a sleepy town – but we made a party of it anyway.

I was nervous about the price. This kind of service must be expensive, right? I snatched the bill as soon as it came, but I needn’t have worried. and the total was 800,000 VND, just about $35. Expensive by Vietnamese standards, but less than two people would spend for a night of drinking even in a cheap bar back home.

We finished the evening with big bowls of noodle soup in the market, the perfect end to a fabulous few days in Da Lat.