Today I climbed a mountain!

The mountain is called Yakedake, and it’s in Kamikochi National Park, Nagano Prefecture, Japan. “Dake” means “peak”, which is why it doesn’t get a “Mount”, a “Yama” or a “-San”.

Yakedake from across Taisho-Ike pond, taken last night. Of course I had clear weather on my travel day.

A bit of residual jetlag helped me get up bright and early, and the trailhead is 200 meters from my hotel, so I borrowed a pair of mismatched hiking pills and was on the trail satisfyingly early. And what a trail it was. Straight up the hill, sometimes literally!

Yep, that ladder is the trail.

The leaves were just staring to turn, and bamboo as a ground cover instead of whatever random brush we get in Washington made it feel just a bit exotic. 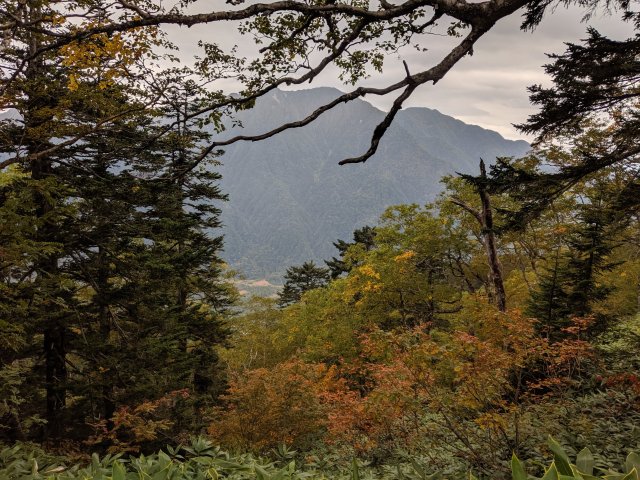 About 2/3 of the way up was a little mountain hut, with a latrine, a basic bunkhouse, and dry goods for sale. Kind of a funny thing to see kilometers from the nearest road. They had similar way houses in Scandinavia, but I at least haven’t seen anything like this back home.

The summit was a couple more steep kilometers (no more ladders though). Of course a huge cloud rolled in just as I was making the final ascent, so I only got a quarter of the panoramic view. It then disappeared 20 minutes after I left the peak. Typical.

Yakedake is an active volcano. It last erupted 2500 years ago, but it shakes every couple of years, and the place is convered in steam vents.

Yakedake’s crater – that’s a steam vent on the bottom.

Being a masochist, I decided to take the long way home, winding my way along the ridge to the next mountain hut, then back down into the valley. When I asked at the hotel, they said “危ない, 気を付けて” (abubai, ki o tsukete) about the ridge section – dangerous, be careful. 危ない is a tricky word though, dangerous is the literal translation but it tends to indicate something that’s unfinished and not for regular use, like a torn up sidewalk or a fire escape. Since they didn’t add anything more than “be careful”, I decided to go for it.

Turns out “unfinished” is a pretty good translation in this case. The trail was easy to follow, but rough and quite strenuous. When I saw on the map that it went along the ridge I expected PCT-grade, but this was an unending stream of brutal ups and downs.

Speaking of which, I’ve been pretty pleased with how quickly my Japanese is been coming back. It took a couple days, but this morning I was able to turn a crappy map and a non-English-speaking concierge into a good amount of information about my route, including difficulty, needed supplies and the availability of food and water.

Finally I reached the junction and found the next way house, Nishino Sanso. This one was more of a lodge, with a full restaurant and a big bunkhouse. Everything is kind of expensive – the place is run by volunteers but it’s still tricky to get things up there. I had a bowl of soup and a cup of coffee for lunch for 1200¥ (about $12), then filled up one of my my water bottles for 200¥ and used the bathroom for another 100¥. I get it, the idea is to prevent you wasting resources you don’t need, but it felt a little like they were nickel and diming me. Still, it would be great to spend the night up here. Maybe next trip.

Then down down down back into the valley, losing a vertical kilometer over just 3km of trail. I think more of the trail was stairs than not. Someone needs to tell their version of the WTA about switchbacks.

Finally finally finally I reached the trailhead, and immediately sat down with a beer. My legs are jelly, my knees ache, my calves are cramping up, and I am terribly pleased with myself. All told, I don’t know how far I traveled. Despite looking all over the place I was not able to find a good topo map with distances or elevations, and the map I got from the hotel listed distances in terms of walking time. They were spot on – I was on the trail for 7 hours not counting lunch, just as predicted – but that doesn’t help me figure out my pace. Ah well.

I think the best way to sum it up is that I had an adventure today. Some parts were incredible, some parts were a little miserable, and I’d do it all again in a heartbeat. Just give me a day to rest first.

In other news, I learned a couple of new words today. Draft beer is 生ビール, “namabiiru”, and bottled beer is 瓶ビール, “binbiiru”. The more you know…